I haven’t seen very many Stanley Kubrick movies, though I learned to my surprise a few years ago that he was responsible for one of my favorite childhood action movies, Spartacus. A few weeks ago, I watched his World War I film, Paths of Glory, starring Kirk Douglas (like Spartacus). The film is about a French general who accuses his troops of cowardice after a failed charge. Three soldiers are randomly selected to face a kangaroo court martial with the sentence of death hanging over their heads. Their colonel, played by Kirk Douglas, argues for the defense. So it’s a combination war film and courtroom drama (unlike Spartacus).

Though I haven’t seen many Kubrick films, I have read enough to know about his famous perfectionism. He often shot close to a hundred takes of a scene before he was satisfied. I also knew he was a photographer, so I expected Paths of Glory to be a visual delicatessen. I wasn’t disappointed. The film is beautiful, light and shadow playing off one another in every frame. Kubrick made good use of his locations, too, especially during the court martial and execution scenes, which were both shot at Schloss Schleissheim in Germany near Munich. I was surprised, though, that the cinematography wasn’t more… well, symmetrical, I guess. I noticed this most in the execution scene. Take a look at the screenshots below (thanks, film-grab.com — one of the best places out there for cinematographical references). 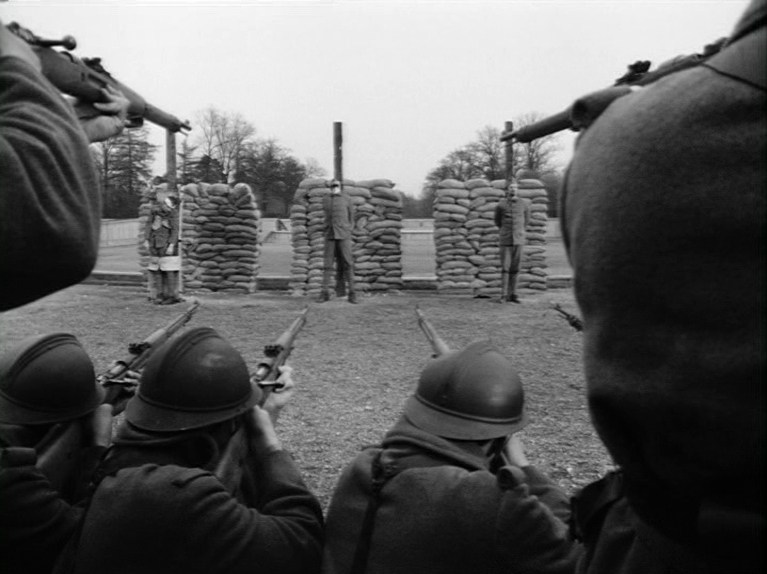 Nudge the camera in any of these shots and you’d have a perfectly balanced frame. Especially that first one! Come on, why isn’t the accused in the center centered under the archway? It could be an aesthetic choice. As a photographer, Kubrick probably spent a lot of time looking through a lens. (The last screenshot above is practically balanced in its imbalance.) He may have chosen to frame the film like this for a greater sense of realism. War is messy, so is making movies. The rough-and-readiness of the shots do make you feel like you’re there, witnessing the events unfold. Or it could be that the production schedule was rushed, the crew were harried, and nobody could be bothered to make sure both sides of the building were in the frame. Not likely, given the director’s aforementioned perfectionism.

Thinking about that word, “imbalance,” I wonder if Kubrick is communicating something by intentionally framing the action in this slightly off-kilter way. In the story, high-ranking officers shoot three innocent soldiers rather than own up to their mistakes. The structure of responsibility fails. The world skews. Kubrick may have translated this sense of unreality into the pictures themselves. A balanced frame would imply that justice is being done and all is right with the world. The story insists that all is not right, and what better way to underscore this than through slight imperfections in the way the characters are presented?

I am alive and have two legs. This state of affairs will hopefully continue for quite some time. View all posts by cleithart